The overall objective of this study was to contribute to women’s agricultural productivity, incomes, household food and nutrition security, and gender equality through a gender transformative Farmer Field and Business School compared to the standard, gender-neutral Farmer Field School (FFS) model. The specific objectives were:

AWSC Team led in the collection of qualitative data in the endline survey which was conducted in July/August 2020. The endline survey was in addition to the baseline survey and midline survey conducted earlier in the project. The endline survey was conducted by AWSC, CARE International in Kenya and KALRO to determine the extent to which women farmers in Kinangop Sub-County are empowered, two and half years since the inception of the project. The survey sought to address objective three of the project, which is to assess the impact of FFBS on gender equality and women’s empowerment. The measurement of women empowerment was based on The Project- Women’s Empowerment in Agriculture Index (Pro-WEAI) which measures the Intrinsic Agency, Instrumental Agency, and Collective Agency of women in the agriculture sector.

Qualitative data was collected using Focus Group Discussions (FGDs) and Oral Testimonies (OT). FGDs were conducted for women only, men only and for mixed groups. Oral testimonies were also conducted for both women and men. In addition women spread across treatment and control areas were interviewed for Genders Sensitive Indicators (GSI).

The following is a brief summary of the key findings of the endline survey, on all the indicators of women empowerment as well as community’s understanding and perception of empowerment: 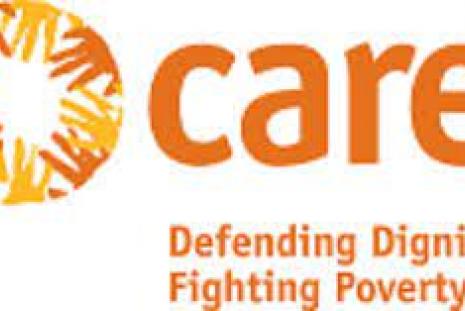 In collaboration with our partners, be thought leader in each of the four work cluster areas, which are Affirmative Action Funds and entrepreneurship; Women in formal and informal employment; Child care and women’s work; and Women’s movement and policy advocacy for WEE. Drawing from a multi-disciplinary team of scholars in economics, women’s studies, law, business studies and development studies, the hub will produce foundation research to understand what matters for women’s economic empowerment and understand pathways that enable women’s work. It will provide expertise to policy makers, researchers and other stakeholders in these four program areas.

The WEE Hub will work collaboratively with civil society, the women’s movement and relevant government departments to generate cutting edge data to strengthen generation and use of evidence to advance WEE and gender equality in Kenya, which will be used to provide innovative policy and research ideas in the four cluster areas. Further, the WEE Hub will build the necessary infrastructure for the scale up of these innovative ideas, build demand for evidence and ensure it informs policies, programs and public discourse. As a thought leader, the WEE Hub will contribute towards shaping the agenda for WEE in Kenya, and influencing policy development and implementation.

3rd ANNUAL CONFERENCE ON THE STATUS OF AFRICAN WOMEN

The African Women’s Studies Centre (AWSC) of the University of Nairobi will hold a conference from with the theme:

Due to the current corona virus pandemic, we will this year hold our conference virtually, and participants will for the first time interact virtually. The university of Nairobi is therefore making all the necessary arrangements to make this conference deliver a unique experience to the participants.

In this perspective the AWSC invites abstracts and full papers from interested scholars on the following broad thematic areas:

is the 3rd Annual event hosted by the University of Nairobi in October each year. The week features over ten different conferences covering a diverse range of academic disciplines, one of which is bound to meet your interest and area of expertise.

The conferences provide a forum to enable you to present your work, engage with your colleagues, and learn about the latest developments in your field.

For students, especially PhD students, Research Week 2020 provides and ideal forum to present and receive positive critique on your work before you submit it for journal publication, or before your dissertation defence.

DUE to the on-going COVID-19 Pandemic all the 2020 conferences will be online. 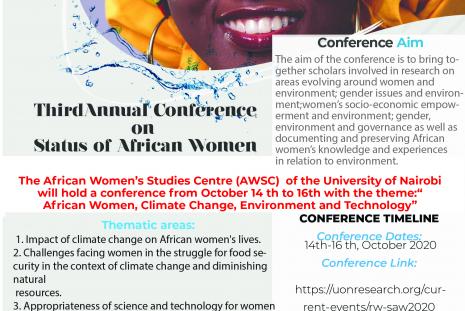 AIBUMA @10 conference brings together leading academics, researchers and business leaders to exchange and share their experiences and research.  We encourage interdisciplinary   research and collaborations.  You can participate in a number of ways;

Send your abstracts or synopsis to Wniraki@uonbi.ac.ke or Xniraki@gmail.com  or hilda@uonbi.ac.ke. Undergraduates and postgraduates students are encouraged to contribute. There is a prize for the best graduate and undergraduate paper/presentation. You can call me on 0733655262.

The Department of Literature at the University of Nairobi has organised this conference to promote a healthy debate on value creating education and critical thinking. We invite scholars, practitioners, professionals and students to participate in the discussions. The two broad themes are Value Creating Education for Sustainable Development and Critical Thinking in a Global World